FX And The Possibility Of Thanksgiving Breakouts

It is a holiday week here in the United States and yesterday’s muted moves had investors looking forward to a quiet rest of the week for currencies. The forex market will trade continuously over the next few days but the equity and bond markets in the U.S. will be closed on Thursday with a half day on Friday.

However with President Trump expected to make a decision on the HK bill and trade headlines ramping up, we would not be surprised if low liquidity during the holidays leads to an expansion in volatility. In fact, currencies actually have a history of breaking out or reaching new milestones the week of Thanksgiving. Just take a look at the charts below.

In 2015, EUR/USD and GBP/USD fell to a 7-month low the week of Thanksgiving as USD/JPY consolidated. In most cases, the trend that was in place immediately before the holidays continued. No major milestones was reached in 2018 but if there’s a breakthrough on trade, we could see USD/JPY hit fresh 5 month highs above 109.50 and slip to 1 month lows below 1.10. Risk appetite remains bid as Trump said yesterday the U.S. and China are nearing a trade deal but he wants to see things go well in HK.

Fundamentally, there’s not much on the U.S. calendar but nothing matters more than the headlines. The euro and will be in focus, with and scheduled for release from the Eurozone and numbers from Canada Thursday and Friday. Comments from Reserve Bank of New Zealand could also inspire a big move in the . NZD was the best performer yesterday, thanks to strong —spending grew 3 times more than expected in the third quarter. 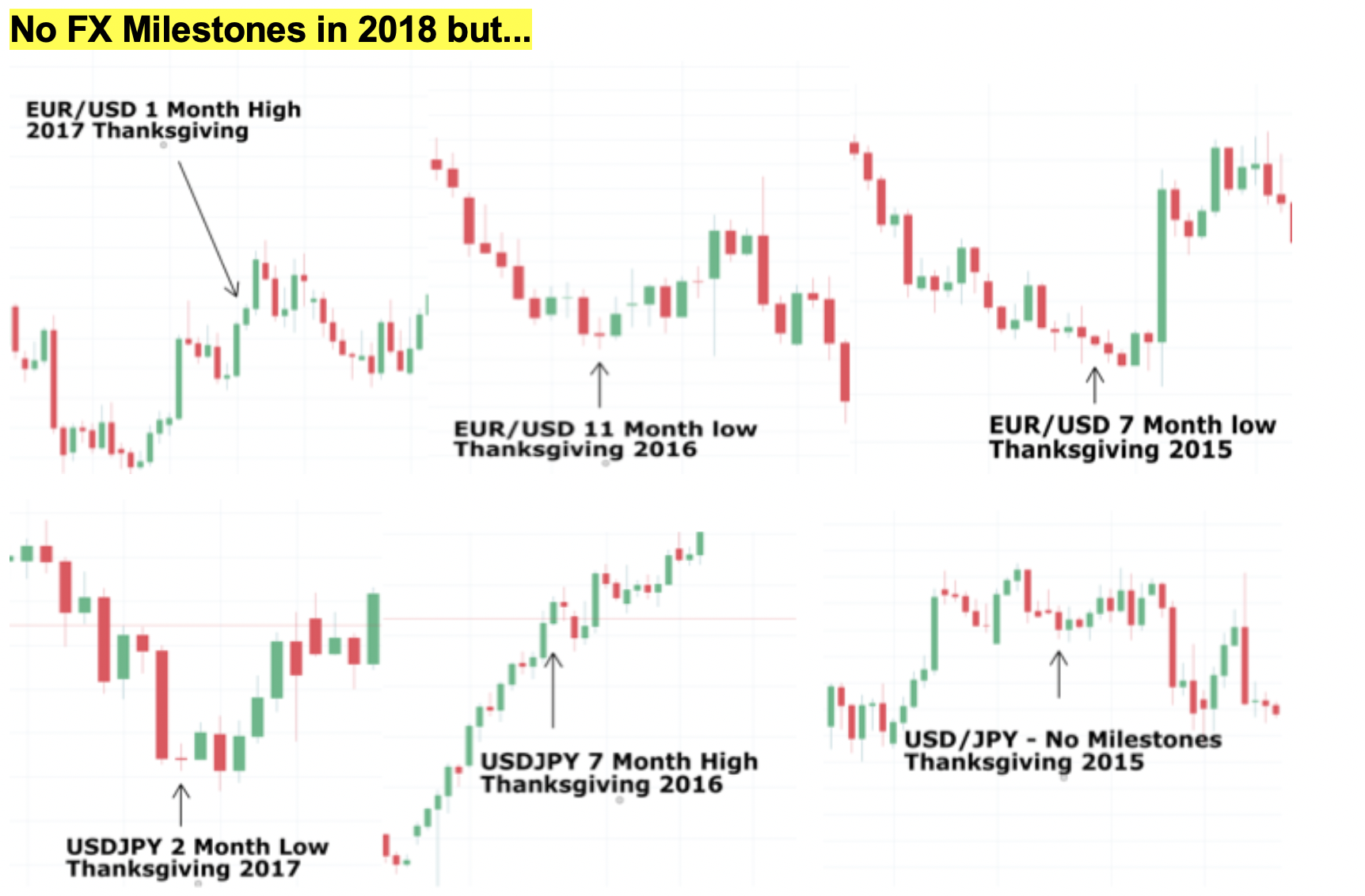 EUR/USD, EUR/JPY Performance 2015-2017
Disclaimer: Fusion Media would like to remind you that the data contained in this website is not necessarily real-time nor accurate. All CFDs (stocks, indexes, futures) and Forex prices are not provided by exchanges but rather by market makers, and so prices may not be accurate and may differ from the actual market price, meaning prices are indicative and not appropriate for trading purposes. Therefore Fusion Media doesn`t bear any responsibility for any trading losses you might incur as a result of using this data.

Fusion Media or anyone involved with Fusion Media will not accept any liability for loss or damage as a result of reliance on the information including data, quotes, charts and buy/sell signals contained within this website. Please be fully informed regarding the risks and costs associated with trading the financial markets, it is one of the riskiest investment forms possible.