The is higher on dollar weakness after U.S. factories extended their . However, political uncertainty in Germany and a burgeoning European trade war with the U.S. is weighing on the single currency. And despite the gains of the past four days, the EUR/USD is facing a downward trajectory as the pressure increases.

U.S. President Donald Trump now clearly has Europe in his crosshairs after yesterday slapping Argentina and Brazil with steel tariffs. Meanwhile, the potential split of Germany’s ruling coaliton increases political uncertainty for Europe’s growth engine, while pressing down further on the common currency.

From a technical perspective, as well, the euro’s risk is to the downside. 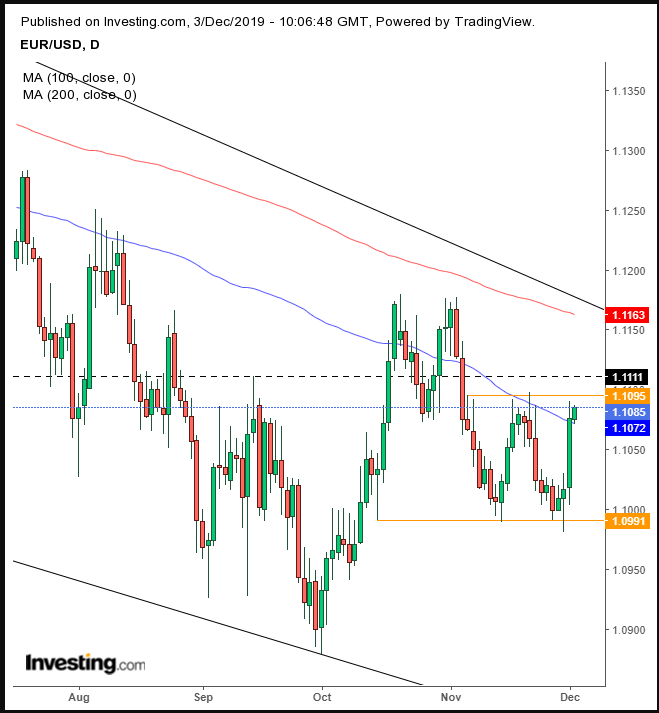 The euro is up today for the fourth consecutive session, for a total gain of 0.75% — 0.55% of which was garnered yesterday on dollar weakness. U.S. factories data fell short of estimates and matched the weakest data during the expansion. In other words, the single currency didn’t rise on its own merits.

While the euro managed to remain above the 100 DMA for the second day, which is a sign of demand, it remains below the November highs—beneath the 1.1100 levels that’s acted as a support and resistance area since Apr. 26.

Moreover, this local resistance is within the backdrop of a long-term downtrend since the February 2018 top, further accentuated and framed within a falling channel since August 2018.

Taken together, this is a strong indication that supply-demand pressure is downward.

Conservative traders would wait for the optimum entry: a full return-move to the channel top, where it would demonstrate that bears are still in charge, as prices fall back in resumption of the falling channel.

Moderate traders may wait for the full pullback for a better entry, not necessarily for proof of trend. Alternatively, they could short the pair if it turns down and falls below the Nov. 29, 1.0981 low, with a stop-loss placed above the 1.1000 level, the bottom of a support since Oct. 15.

Aggressive traders may short now, after having calculated the potential risk versus gain and ascertained they agree with their overall trading philosophy.

Note: A sample demonstrates the components of a trade plan. Trading success is measured by overall trading, not based on a single trade. Also, both the risk and the reward could be amended based on risk aversion.